Walk the Walk to End Alzheimer's! 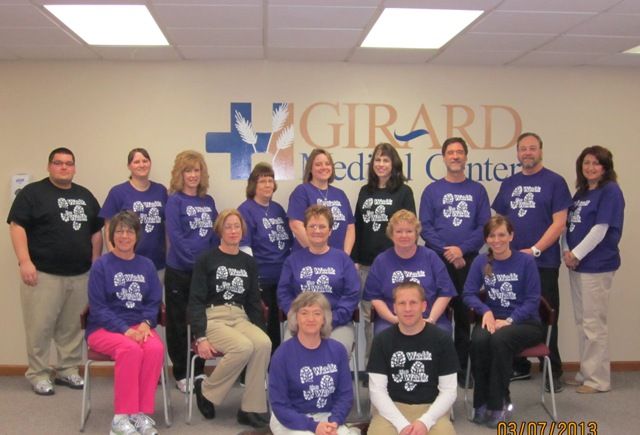 Every 69 seconds, another American develops Alzheimer’s disease – and the need for increased research funding grows significantly.

For this reason Mike Willis, GMC Community Outreach Coordinator, made it a personal goal of his for Girard Medical Center to raise at least $2,500 for this important cause.    Mike explained why he has made it his personal mission to raise funds:  “Alzheimer’s negative impact on quality of life has a significant ripple effect beyond that of the diagnosed individual.  Caretakers, who are often family or friends, can become easily overwhelmed physically, emotionally and financially by the daunting task of caring for loved ones afflicted with Alzheimer's.  Research toward a cure gives hope to all those touched by Alzheimer’s.”

That’s why, for the fourth consecutive year, Girard Medical Center has partnered with the Alzheimer’s Association’s Heart of America Chapter for the Walk to End Alzheimer’s, scheduled this year for Saturday, May 18, at Immigrant Park in Pittsburg. The goal? To spread awareness, provide support and raise funds, with the ultimate mission of ending Alzheimer’s disease – the sixth-leading cause of death in the United States – altogether.

Mike said he hopes to see hundreds of participants at the Walk to End Alzheimer’s, which in 2012 raised more than $51 million nationwide and a record-breaking $25,000 in southeast Kansas. This year, the local team aims to top that.

“If that amount could continue to rise in Pittsburg as well as at other Alzheimer’s walks throughout the country, then this horrible disease might be conquered sooner rather than later,” he said.

According to the Alzheimer’s Association, 5.4 million Americans suffer from Alzheimer’s, and caring for them will cost the country $203 billion this year. If the incidence of the disease continues on its current trajectory, 16 percent of Americans age 65 and older will have Alzheimer’s by 2050, and caregiving costs will climb to $1 trillion.

GMC has worked to do its part to raise funds for Alzheimer’s research by contributing $500 for the local walk, as well as by sponsoring a T-shirt fundraiser encouraging people to help “solve the Alzheimer’s puzzle.” GMC employees have raised more than $1,000 through T-shirt sales for the local chapter of the Alzheimer’s Association.

“Contributing funding toward the development of a cure for Alzheimer’s increases the potential for administering more effective modes of treatment to GMC patients who suffer from such a debilitating disease,” Willis said.

You can get involved in the fight against Alzheimer’s by participating in this year’s Walk to End Alzheimer’s. Check-in starts at 9:30 a.m. at Immigrant Park, with the walk scheduled to begin at 10 a.m.